This morning in Fort Collins was the Tour de Fat. Basically a bunch of people from the town (by a bunch, I mean like 20,000) get together to ride around, drink beer, and make new friends. Quite honestly, it was awesome. I loved it. At first I wasn’t going to participate. But then I thought, “Why not?” And I had no good answer, so I did it.

Once I decided to participate, I had to figure out what I wanted to be. So I did what any nerd would do: I Googled “bike costume”. Low and behold, the first result was a Stormtrooper on a Speeder Bike (technically this would make him a Scout Trooper for all you Star Wars fans). Win! That’s what I wanted to be.

Of course the Scout Trooper outfit is significantly different from a traditional Stormtrooper. And besides, I just didn’t want to go out a buy a costume. What’s the fun in that?

So after a trip to Toys R Us and a quick stop by Home Depot, I had everything that I needed.

Now fun the started. I really had no plan. I just made it up as I went. Cutting. Pasting. Adding zip ties. Taping. I was just building.

And that time was the best, most relaxing two hours I’ve had in months. Seriously. Months.

You see there is something about building something that makes me…well….me. Getting lost in the problem. Seeing what an object can be and then making it happen. It’s the same feeling some people get when they talk about the outdoors. But to be honest, the outdoors doesn’t do much for me. I mean, I love it. It’s beautiful. I live in perhaps one of the most beautiful states in the country.

Other people love to spend an afternoon on the beach. I love the beach too. But after about 15 seconds in the sun, I’m ready for something else.

I think creating teaches us more about our creator. I think that there is an insatiable desire in all of us to make something. That somehow, through the act of creating we are worshipping our creator. Imitation is the sincerest form of flattery.

Stop and think about being creative for just a minute. Creativity can be a state of being. It’s that moment when you’re so far in the zone that you don’t even realize the fun that you are having. You are so focused on what is happening that you forget everything else.

And that’s where I was last night. For the first time in a long time. It was me, a hardhat, a mask, some cardboard, and some zip ties. And it was by no means a masterpiece. It looks Ok. Just Ok.

Here, you can see for yourself: 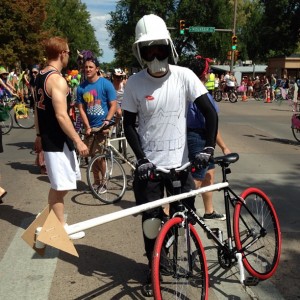 But I wouldn’t trade that experience for anything.

When’s the last time you got lost in building something?

Jack of All Trades?

An Open Letter to Compassion International